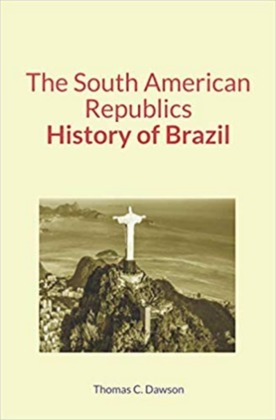 pThis book presents the History of Brazil, from the discovery to the establishment of the Republic./p
p“On the 9th of March, 1500, Pedro Alvarez Cabral, a Portuguese nobleman of illustrious birth, but not yet distinguished by any notable feats in war or seamanship, sailed from Lisbon for the East Indies. This expedition was sent out to continue the work begun by Vasco da Gama in the first all-sea voyage to India. It was an advance-guard for the larger armament that two years later founded the Portuguese empire on the coasts of India. Vasco da Gama himself wrote Cabral's sailing orders. The latter was instructed, after passing the Cape Verde Islands in 14° North, to sail directly south, as long as the wind was favourable. If forced to change his course, he was ordered to keep on the starboard tack, even though it led him south-west. When he reached the latitude of the Cape of Good Hope — 34° South — he was to bear away to the east.These sailing instructions have been the subject of much discussion. Many believe their sole purpose was to enable Cabral to avoid the Guinea calms, so annoying to sailing ships near the African coast. Others contend that Da Gama had seen signs of land to the west on his own voyage, and that its discovery was a real, though secondary, object of the expedition. In any event the Brazilian coast is too near the natural route around Africa to have escaped encounter, and would infallibly have shortly been seen by someone else.Forty-two days after leaving Lisbon, Cabral's fleet saw unmistakable signs of land, being then in latitude 17 degrees south and longitude 36 degrees west. From the Cape Verde Islands, just off the western point of Africa, he had made 2300 miles, and had come 500 miles to the west. The next day a mountain was sighted, which he called Paschoal, because it was Easter week. This mountain is in the southern part of the state of Bahia, about four hundred miles north-east of Rio, and on a coast that to this day is sparsely inhabited and rarely visited. The following day the whole fleet came to an anchor a mile and a half from the shore, and just north of the dangerous Abrolhos reefs. This was the 23rd of April, Old Style, which corresponds with the 3rd of May in the Gregorian calendar. The date is a national holiday in Brazil, and the anniversary for the annual convening of Congress. Because no quadrupeds or large rivers were seen, Cabral thought he had discovered an island and named it the "Island of the True Cross." The name has not survived except in poetry. He stopped ten days on the coast, took formal possession, and sent expeditions on shore which entered into communication with the Indians, who were seen in considerable numbers. It is characteristic that the first question asked of the Indians was if they knew what gold and silver were. They were peaceable and friendly, and the old chronicle describes them as of a dark reddish complexion with good features, and muscular, well-shaped bodies. They wore no clothes, their lower lips and cheeks were perforated to carry great ornaments of white bone, and their hair was elaborately dressed and adorned with feathers.These were fair specimens of the Tupi-Guaranies, the largest of the four great families into which the Brazilian aborigines have been classified. The others are the Caribs, the Arawaks, and the Botacudos. There are also traces of tribes who inhabited the country remote centuries ago. In caves in Minas Geraes skeletons have been found remarkably like those of the earliest Europeans. The theory is that these Indians came from Europe by land in that remote geological epoch when Scandinavia was joined to Greenland. Later came Mongoloids, probably by way of the Behring Strait, who appear largely to have exterminated their European predecessors, and to have been the ancestors of the modern Indians..." /p