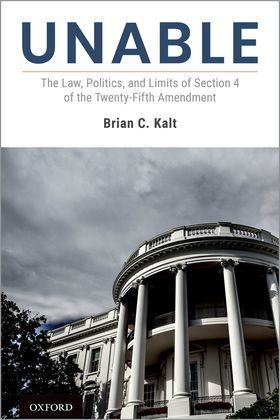 Since the election of President Donald Trump, the Twenty-Fifth Amendment to the Constitution - covering presidential incapacity - has been a frequent topic of public discussion. But few understand how this amendment really works.

Unable: The Law, Politics, and Limits of Section 4 of the Twenty-Fifth Amendment explains, in Part I, the basics of the Twenty-Fifth Amendment, especially Section 4, correcting common misconceptions, and resolving some of its ambiguities. Part II explores history: presidential disability before Section 4; the creation of Section 4 in 1965; the (non)use of Section 4 since then; and Section 4's portrayal in movies, books, and television. Part III presents a series of hypothetical scenarios that dramatize how Section 4 would work - or not work - in a wide variety of situations. Part IV concludes with some thoughts on how Section 4 interacts with constitutional law more generally, and some suggestions on how to improve Section 4's operation.

Unable is designed to educate and inform the public about Section 4 and the Twenty-Fifth Amendment in an even-handed and accessible way, allowing readers to judge for themselves whether presidents - past and present - were or are fit to serve in office.