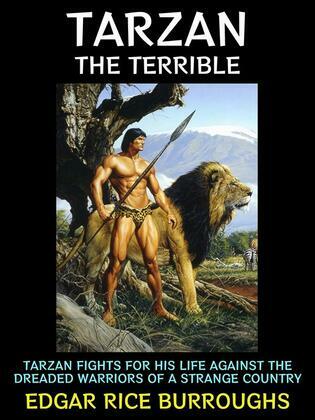 Tarzan the Terrible by Edgar Rice Burroughs. In the previous novel, during the early days of World War I, Tarzan discovered that his wife Jane was not killed in a fire set by German troops, but was in fact alive.In this novel two months have gone by and Tarzan is continuing to search for Jane. He has tracked her to a hidden valley called Pal-ul-don, which means "Land of Men." In Pal-ul-don Tarzan finds a real Jurassic Park filled with dinosaurs, notably the savage Triceratops-like Gryfs, which unlike their prehistoric counterparts are predatory. The lost valley is also home to two different races of tailed human-looking creatures, the Ho-don (hairless and white skinned) and the Waz-don (hairy and black-skinned). Tarzan befriends Ta-den, a Ho-don warrior, and Om-at, the Waz-don chief of the tribe of Kor-ul-ja. In this new world he becomes a captive but so impresses his captors with his accomplishments and skills that they name him Tarzan-Jad-Guru (Tarzan the Terrible), which is the name of the novel.