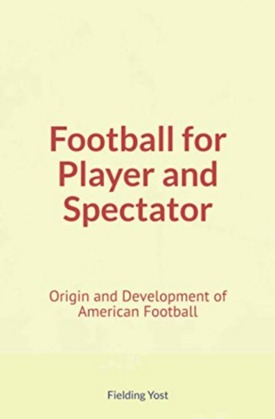 Football for Player and Spectator : Origin and Development of American Football

pThis book presents the Origin and Development of American Football. Football, although indefinitely known as a sport to Greek and Roman antiquity, did not come into existence as a school or college game until the eighteenth century. During the three or four centuries prior to this time football, in a vague way, figured in English inter-town and county contests. It first appeared as a distinct school game in the early part of the eighteenth century, but at this time was in more or less disfavor on account of the strict Puritanism of the period.It is to the English schoolboy that the game of football really owes its origin. During the middle of the nineteenth century there was an athletic revival throughout England and football became the favorite pastime of the winter months in such schools as Rugby, Eton, Harrow, Charterhouse and others. The game came to its present important position through a gradual evolutionary process in which both a standard of play and of rule were developed together. In the growth of the two principal forms of modern play, "Association" and "Rugby", the size of the particular school ground was the determining factor. In 1850 the only school playground in England large enough to permit the running and tackling game was connected with Rugby. At Harrow, kicking and fair catching were allowed. A game was developed at Eton peculiar to this school and called the "wall game", while at other schools the play consisted almost entirely of so called "dribbling", in which carrying the ball and tackling were unknown... /p
p /p