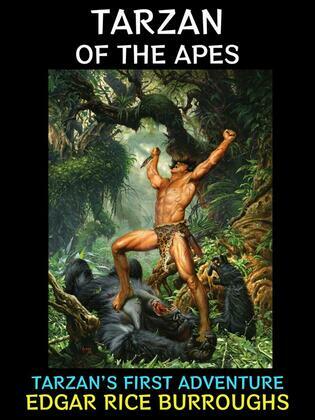 Tarzan of the Apes

Tarzan of the Apes is a novel by American writer Edgar Rice Burroughs, the first in a series of books about the title character Tarzan. The story follows Tarzan's adventures, from his childhood being raised by apes in the jungle, to his eventual encounters with other humans and Western society. So popular was the character that Burroughs continued the series into the 1940s with two dozen sequels. The novel tells the story of John Clayton, born in the western coastal jungles of equatorial Africa to a marooned couple from England, John and Alice (Rutherford) Clayton, Lord and Lady Greystoke. Adopted as an infant by the she-ape Kala after his parents died (his father is killed by the savage king ape Kerchak), Clayton is named "Tarzan" ("White Skin" in the ape language) and raised in ignorance of his human heritage.