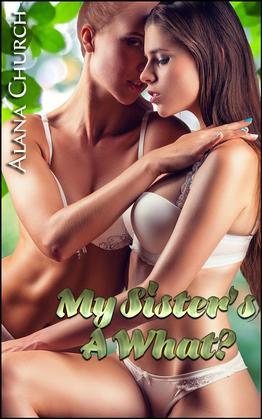 My Sister's A What?

Two hours later, Ruth sat beside her sister as she turned the camera on. Her body was a nervous roil of anticipation, and she had to lace her fingers together to keep them from shaking.

"Hi, guys!" Georgina said from her seat beside her, her voice high and perky. "We're back. Your best girl Georgie and my new roommate, Ruth!

"Now Ruth was kind of surprised when she found out that I cam. But once I told her how cool it was, she decided she wanted to give it a try! So let's make sure she wants to keep with it, okay? Ruth's a good girl," she giggled. "Not like me. So don't tell us how you want to lick chocolate syrup out of her butthole, or anything gross like that.

"Now this afternoon," she went on, "I asked for some ideas about what we should do for our first doubles session. We got some real good suggestions. But we're going with Captain Marvelous tonight. She said that she thought Ruth was an attractive young lady, but she could look a lot better if she tried.

"So it's Makeover Time!" she cheered. "Ruth, stand up and turn around so everyone can take a look."

Blushing, she did. At Georgie's insistence, she was wearing the same clothes as earlier in the day. And she had actually removed her makeup. The only thing her sister had let her do was take a shower.

When she sat down, Georgie was shaking her head. "Isn't that terrible? It's like you decide to buy a really cool car. Maybe an old Mustang, or a Charger. Classic cars are so awesome, am I right?

"And then, because you were afraid of it getting stolen, you put an absolutely hideous coat of paint on it. What's the point of being hot if you try your best to look ugly?

"But guys, this one is going to be a long one. You don't turn Cinderella into a princess in thirty minutes. So me and Ruthie are going to kick back with a glass of wine and turn on the timer. We're asking for ten thousand tokens. I know this sounds a little high," she went on. "But this is for the both of us, not just me. A full-body makeover takes time. And I promise you, you'll get your money's worth."

This was the only part they had rehearsed. Georgie had insisted on it, and they had run through the lines a dozen times, until her sister was convinced she had the exact right amount of nervous hesitancy.

"Hold on a second." She turned to Georgie. "What do you mean, full-body makeover?'"

Her sister covered her mouth, her eyes dancing. "I mean that I hope you've shaved your legs, sweetie. Because if you haven't, we're getting the razor out. Full body means full body. We're not going to slap on some lipstick and maybe some eye shadow and call it a day. We're going to fix you, head to toe."

"Will I have to be naked?" Even now, the thought made her shiver. But in anticipation, not fear. Under her baggy sweatshirt, she could feel her breasts tingle in arousal.

"Does it make you nervous?"

"Of course it does!"

"Would it make you feel better if I was naked, too?" She turned to the camera. "How about it, guys? Should I put on my birthday suit? Yes? Well, let's see those tokens, then! And I'm upping the challenge. If we get ten thousand, we're doing Ruth's makeover. But if you want to see both of us in the raw..."