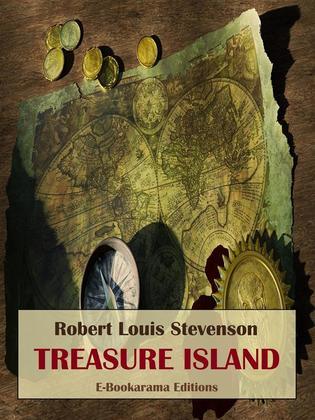 "Treasure Island", classic adventure novel by Robert Louis Stevenson, serialised in the magazine Young Folks from October 1881 to January 1882 and published in book form in 1883. Although not the first book about pirates, "Treasure Island" is considered by many to be the best.

"Treasure Island" was first a map that Stevenson drew for the amusement of his stepson. The map proved so interesting that he created a story to go along with it, reading instalments of the story to his family as he finished them. Stevenson’s father, who happened to be visiting on the day of one of those readings, became so attracted to the story that he made plot suggestions, at least two of which were followed (the contents of Billy Bones’s trunk and Jim Hawkins in the apple barrel).

A pirate walks into the inn owned by the father of Jim Hawkins. The pirate’s name is Bill Bones, and he has a map to a treasure on an island in a chest. He is a gravely old man who dies of a stroke after getting a notice that the pirates he had been running from, had found him. Jim finds the map and shares it with a doctor and squire near his home. They decide to get a ship and crew to find the treasure. But, the sailor they hire is Long John Silver, who they discover is a pirate. He has a two-hundred-year-old parrot that sings shanties and sits on his shoulder.

The few men left, set sail for home, taking Silver with them. He jumped ship before they landed, taking a couple bags of gold with him. Jim and his friends use the gold they have, but none of them want to go back to the haunted island, even if there is any treasure left in the ground...