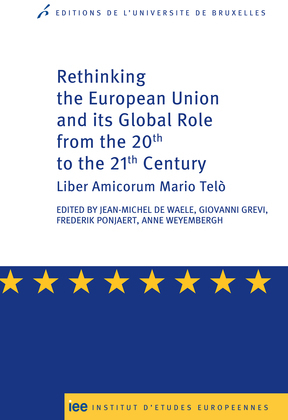 Discover the various scientific debates that Mario Telò has been involved.

This edited volume, which has been drafted in honour of Professor Telò?s research career, offers the reader an overview of the various scientific debates that he has been involved in throughout his distinguished career. The aim was to highlight, contextualise and build on his most innovative contributions to each of these debates.

This book revolves around four thematic areas, each of which brings together a number of contributions that offer timely reflections on a given question or challenge covered by Professor Telò?s research.

We wanted to have a personality of international calibre, espousing different political systems across the world. But we also wanted to bring a good teacher into the fold filling students with enthusiasm, able to lead them to develop their study projects, to establish their vocation as researchers and even to train personalities active in every day life, in fact to promote a European conscientiousness.
We know that Mario Telò has perfectly fulfilled these many wishes, in particular through his commitments towards his colleagues as well as his very active role as member and President of the Institut d?études européennes ? Institute of European Studies (IEE-ULB), but also through the support that he has given numerous researchers who have completed brilliant doctoral theses under his supervision.
It is difficult to pay him tribute, however, as Mario Telò has engaged in and still engages in multiple and international academic activities. We have lost count of the number of foreign invitations that have been extended to him as well as his numerous speeches to defend and to explain the need for a European area.
Mario Telò knows better than anyone that European values still need to be defended, that European studies cover several aspects, not just the political integration process in Europe but also the analysis of the behaviour of actors, decision-makers and citizens.
We know that the ?EU acquis? is often temporary and several times the work has to be redone, as the difficulties of functioning with twenty-eight member states, and soon to be twenty-seven member states, show. The European Union does not always respond to the democratic deficit, the political integration approach needs to show the usefulness and expected benefits of European cooperation essential to its existence in a very tense global context.
The energy of Mario Telò, his creativity, his international engagement, his academic openness will always be essential to the ULB. A member of the Académie Royale de Belgique [Royal Academy of Belgium], in the Classe des Lettres et des Sciences morales et politiques [section of letters and moral and political sciences], Mario Telò will always find the opportunity to express his analyses and proposals to get through the currently very troubled time of Europe?s and the world?s evolution.