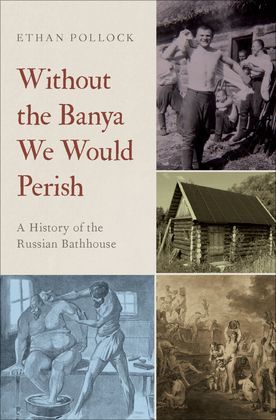 Without the Banya We Would Perish

When so much in Russia has changed, the banya remains. For over one-thousand years Russians of every economic class, political party, and social strata have treated bathing as a communal activity integrating personal hygiene and public health with rituals, relaxation, conversations, drinking, political intrigue, business, and sex. Communal steam baths have survived the Mongols, Peter the Great, and Soviet communism and remain a central and unifying national custom. Combining the ancient elements of earth, water, and fire, the banya paradoxically cleans bodies and spreads disease, purifies and defiles, creates community and underscores difference.

Here, Ethan Pollock tells the history of this ubiquitous and enduring institution. He explores the bathhouse's role in Russian identity, following public figures (from Catherine the Great to Rasputin to Putin), writers (such as Chekhov and Dostoevsky), foreigners (including Mark Twain and Casanova), and countless other men and women into the banya to discover the meanings they have found there. The story comes up to the present, exploring the continued importance of banyas in Russia and their newfound popularity in cities across the globe. Drawing on sources as diverse as ancient chronicles, government reports, medical books, and popular culture, Pollock shows how the banya has persisted, adapted, and flourished in the everyday lives of Russians throughout wars, political ruptures, modernization, and urbanization.

Through the communal bathhouse, Without the Banya We Would Perish provides a unique perspective on the history of the Russian people.