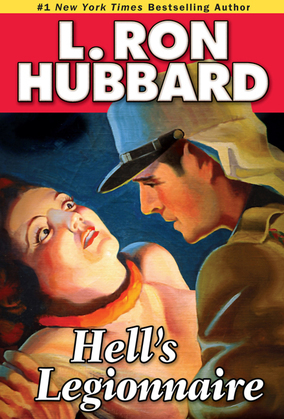 by L. Ron Hubbard (Author)
Fiction Action & Adventure English literature American and Canadian literature
American Ann Halliday is as sexy as Rita Hayworth and as fiery as the Sahara sun. And now she’s feeling some real heat, as the prize captive of the Berber known as “The Killer.” But Dusty Colton, an American deserter from the French Foreign Legion, has all the swagger of Robert Mitchum—and he has a different idea. Can they team up and turn evil on its head?  One thing’s for sure—between Ann and the Hell’s Legionnaire, the temperature is about to get even hotter.

On the subject of North Africa, Hubbard said that writers too often “forget a great deal of the languorous quality which made the Arabian Nights so pleasing. Jewels, beautiful women, towering cities filled with mysterious shadows, sultans equally handy with robes of honor and the beheading sword.” Hubbard brings this unique insight to his stories of North Africa and the Legionnaires, investing them with an authenticity of time, place and character that will keep you asking for more.

Also includes the adventure stories, The Barbarians, in which a Legionnaire sets out to avenge a savage killing and makes a stunning discovery, and The Squad That Never Came Back, the story of a man who has uncovered the secret to a city of gold—a secret that could turn into a death sentence.