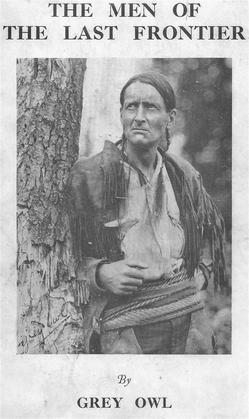 The Men of the Last Frontier

In 1931 Grey Owl published his first book, The Men of the Last Frontier, a work that is part memoir, part history of the vanishing wilderness in Canada, and part compendium of animal and First Nations tales and lore. A passionate, compelling appeal for the protection and preservation of the natural environment pervades Grey Owl's words and makes his literary debut still ring with great relevance in the 21st century.

By the 1920s, Canada's outposts of adventure had been thrust farther and farther north to the remote margins of the country. Lumbermen, miners, and trappers invaded the primeval forests, seizing on nature’s wealth with soulless efficiency. Grey Owl himself fled before the assault as he witnessed his valleys polluted with sawmills, his hills dug up for hidden treasure, and wildlife, particularly his beloved beavers, exterminated for quick fortunes.