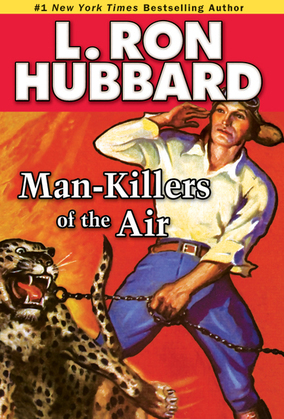 Man-Killers of the Air

by L. Ron Hubbard (Author)
Fiction Action & Adventure English literature American and Canadian literature
Take a touch of Charles Lindbergh, mix in a dash of Evel Kneivel, throw in one man-killing cat—and you’ve got a recipe for adventure featuring the high-flying, hard-living Smoke Burnham.  Now, he’s in a life-and-death race in pursuit of big money . . . and big trouble.  Because one thing you can count on—in the air, in a fight, or in his girlfriend’s arms— where there’s Smoke, there’s fire.

In 1931, as a student at George Washington University, Hubbard founded the college Glider Club and within a few months a respected columnist said “he is recognized as one of the outstanding glider pilots in the country.”  Later he wrote as the aviation correspondent for the prestigious flying magazine Sportsman Pilot.  His combined writing and flying expertise comprised the perfect recipe to give stories like Man-Killers of the Air their authentic flavor.

“Great adventure to keep you on the edge of your seat.” —Gather.com