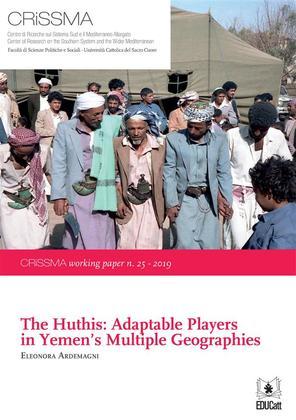 The research of Eleonora Ardemagni is illustrative because it helps to go beyond simplistic understandings of the issues and challenges at stake. In particular, it has the merit of casting new light on one of the less studied crises in the region, the conflict in Yemen, and in particular on one of its protagonists, the Huthis.

Although it represents the world’s largest humanitarian crisis, with 14 million people at risk of starvation, and an armed conflict that has already killed or injured almost 18 thousand people, this civil war still remains at the margins of international public debate. Partially, this is due to the traditional underrating of the importance of this country within the wider Middle East’s geopolitical framework. At the same time, the war in Yemen has been generally underestimated exactly because it has been described by superimposing on it one of the two previous perspectives, either the sectarian or the proxy framework. Initially, it was easily portrayed as one of the “failed springs” in the region, ignoring the long period of war (2004-2010) that took place before the protests against the former regime and, even before that, the political separation in two different, competing regimes during the Cold War. Later on, it was portrayed as a mere pawn in the wider competition between the Sunni and Shite camps, namely between Saudi Arabia and Iran.