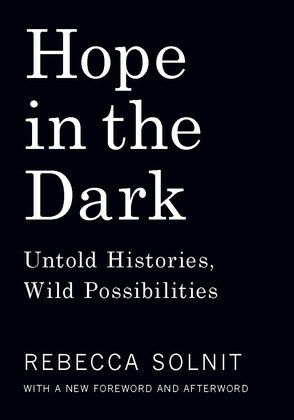 Hope in the Dark

"No writer has better understood the mix of fear and possibility, peril and exuberance that's marked this new millennium."
—Bill McKibben

A book as powerful and influential as Rebecca Solnit's Men Explain Things to Me, her Hope in the Dark was written to counter the despair of radicals at a moment when they were focused on their losses and had turned their back to the victories behind them—and the unimaginable changes soon to come. In it, she makes a radical case for hope as a commitment to act in a world whose future remains uncertain and unknowable. Drawing on her decades of activism and a wide reading of environmental, cultural, and political history, Solnit argued that radicals have a long, neglected history of transformative victories, that the positive consequences of our acts are not always immediately seen, directly knowable, or even measurable, and that pessimism and despair rest on an unwarranted confidence about what is going to happen next. Now, with a moving new introduction explaining how the book came about and a new afterword that helps teach us how to hope and act in our unnerving world, she brings a new illumination to the darkness of 2016 in an unforgettable new edition of this classic book.

Writer, historian, and activist Rebecca Solnit is the author of eighteen or so books on feminism, western and indigenous history, popular power, social change and insurrection, wandering and walking, hope and disaster, including the books Men Explain Things to Me and Hope in the Dark, both also with Haymarket; a trilogy of atlases of American cities; The Faraway Nearby; A Paradise Built in Hell: The Extraordinary Communities that Arise in Disaster; A Field Guide to Getting Lost; Wanderlust: A History of Walking; and River of Shadows, Eadweard Muybridge and the Technological Wild West (for which she received a Guggenheim, the National Book Critics Circle Award in criticism, and the Lannan Literary Award). A product of the California public education system from kindergarten to graduate school, she is a columnist at Harper's and a regular contributor to the Guardian.