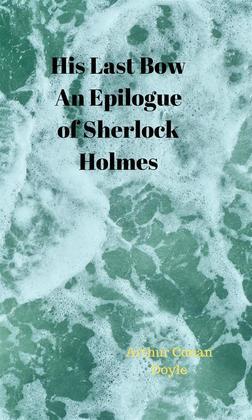 His Last Bow An Epilogue of Sherlock Holmes

"His Last Bow", published in September 1917, is one of 56 short stories about Sherlock Holmes written by Sir Arthur Conan Doyle. On the eve of the First World War, the German agent Von Bork is getting ready to leave England with his vast collection of intelligence, gathered over a four-year period. His wife and household have already left Harwich for Flushing in the Netherlands, leaving only him and his elderly housekeeper. Von Bork's associate, Baron von Herling, is impressed by his acquisition of vital British military secrets, and tells Von Bork that he will be received in Berlin as a hero. Von Bork says that he is waiting for one last transaction with his Irish-American informant, Altamont, who will arrive shortly with a rich treasure: naval signals.