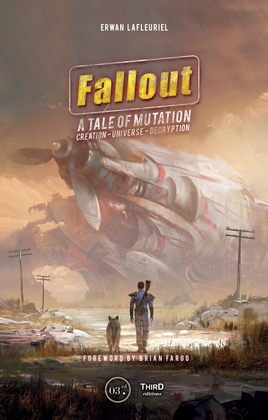 The year was 1997 and Fallout: A Post Nuclear Role Playing Game had just been released by Interplay.

This book looks back at the entire Fallout saga, tells the story of the series' birth, retraces its history and deciphers its mechanics.

The perfect book to discover and understand the origins of Fallout, with the saga's genesis and the decryption of each of his episodes !

The intro music and the end credits were the final main components of this hybrid post-apocalyptic/50s ambiance. Initially, Brian Fargo wanted to signal Fallout?s inspiration with Warriors of the Wasteland, by Frankie Goes to Hollywood, but when he heard The Ink Spots, he changed his mind and loved the result. The first choice was I Don?t Want To Set The World On Fire by this group of crooners from the 1930s/40s, but unfortunately the high cost made it impossible to acquire the rights. But while browsing an extensive list of tracks from the era, the team found that Maybe, by the same group, had almost the same sound-with the added bonus of being cheap! The lyrics are about a break-up, from the point of view of the person being left behind: "Maybe you?ll think of me when you are all alone/ Then maybe you?ll ask me to come back again". Leonard Boyarsky notes that, "It worked with the intro [and the ending]", referring to the ending with the betrayal and lonely exile of Fallout?s hero. "It felt like it was this genius plan we had [...] but it was only later that we decided to kick [the player] out of the Vault. I feel like this is a metaphor for the whole game: it looks like we had a better picture in mind than we did, it just came out of the things we were doing".