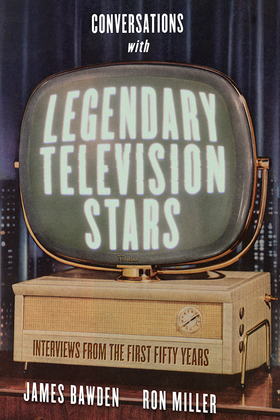 During television's first fifty years -- long before cable networks, Hulu, Netflix, and the like -- families would gather around their television sets nightly to watch entertaining shows such as I Love Lucy, Gunsmoke, M*A*S*H, The Beverly Hillbillies, Fantasy Island, and The Rockford Files. Many of the stars of these beloved shows have passed away, but their presence remains intact -- not only through their television show performances, which are still viewed and appreciated today, but also through stories they told in interviews over the years.

Seasoned journalists and authors James Bawden and Ron Miller have captured provocative and entertaining interviews with important figures from TV's first fifty years. These thirty-nine interviews, selected from conversations conducted from 1971--1998, present a fascinating glimpse of some of television's most influential performers. Featured are exclusive interviews with major stars (including Donna Reed, James Garner, and Ricardo Montalban), icons of comedy (including Lucille Ball, George Burns, and Milton Berle), TV hosts (including Dick Clark and Ed Sullivan), and notable musical entertainers (such as Glen Campbell, Mary Martin, and Lawrence Welk). Each chapter of this volume explores the subject's television work -- with detailed behind-the-scenes disclosures -- and includes additional information about the subject's performances in film and on stage.