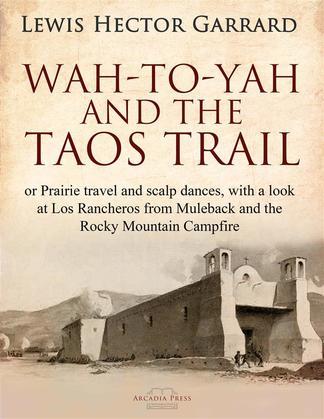 Wah-to-yah, and the Taos Trail

Wah-to-Yah is the only well-known book written by Garrard. It has won a secure place in the literature of the American

On 1 Sept 1846, Garrard, 17 years old, joined a caravan in Westport Landing, Missouri to travel along the Santa Fe Trail to

New Mexico. He stopped off at Bent's Fort for two months and continued on to Taos with a company of Mountain Men to avenge

the death of Charles Bent in the Taos Revolt. While in Taos, Garrard attended the trial of some of the Mexicans and Pueblos

who had revolted against U.S. rule of New Mexico, newly captured in the Mexican–American War. Garrard wrote the only eye

witness account of the trial and hanging of six convicted men.

The book is "fresh and vigorous" and contains in its pages authentic descriptions of "the Indian, the trader, the mountain

man, their dress, and behavior and speech and the country and climate they lived in." The pages of the book contain a

an "anthropologically accurate" description of the Cheyenne Indians.  Garrard condemns the U.S. war against Mexico and

hanging of the rebels in Taos as unjust.