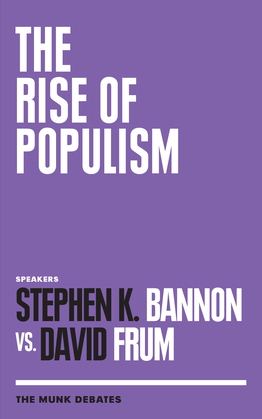 The Rise of Populism

The twenty-third semi-annual Munk Debate, held on November 2, 2018, pits Stephen Bannon, the CEO of the Donald Trump presidential campaign, against columnist and author David Frum to debate the future of liberalism against the rising tide of populism.

Throughout the Western world, politics is undergoing a sea-change. Long-held notions of the role of government, trade and economic policy, foreign policy, and immigration are being challenged by populist thinkers and movements. Does this surging populist agenda in Western nations signal a permanent shift in our politics? Or is it a passing phenomenon that will remain at the fringes of society and political power? Will our politics continue to be shaped by the post-war consensus on trade, inclusive national identity, and globalization, or by the agenda of insurgent populist politics, parties, and leaders?