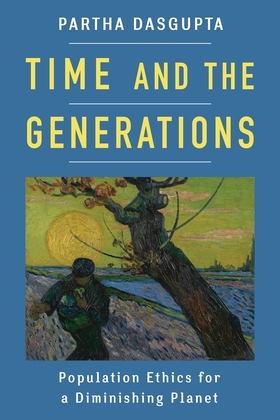 Time and the Generations

How should we evaluate the ethics of procreation, especially the environmental consequences of reproductive decisions on future generations, in a resource-constrained world? While demographers, moral philosophers, and environmental scientists have separately discussed the implications of population size for sustainability, no one has attempted to synthesize the concerns and values of these approaches. The culmination of a half century of engagement with population ethics, Partha Dasgupta’s masterful Time and the Generations blends economics, philosophy, and ecology to offer an original lens on the difficult topic of optimum global population.

After offering careful attention to global inequality and the imbalance of power between men and women, Dasgupta provides tentative answers to two fundamental questions: What level of economic activity can our planet support over the long run, and what does the answer say about optimum population numbers? He develops a population ethics that can be used to evaluate our choices and guide our sense of a sustainable global population and living standards. Structured around a central essay from Dasgupta, the book also features a foreword from Robert Solow; correspondence with Kenneth Arrow; incisive commentaries from Joseph Stiglitz, Eric Maskin, and Scott Barrett; an extended response by the author to them; and a joint paper with Aisha Dasgupta on inequalities in reproductive decisions and the idea of reproductive rights. Taken together, Time and the Generations represents a fascinating dialogue between world-renowned economists on a central issue of our time.