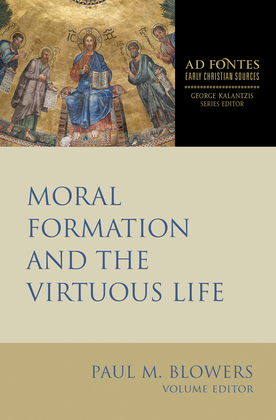 Moral Formation and the Virtuous Life

In Moral Formation and the Virtuous Life, volume editor Paul M. Blowers has translated and gathered several key texts from early Christian sources to explore the broad themes of moral conscience and ethics. Readers will gain a sense of how moral formation was part of a process sustained by pastoral instruction and admonition based on ritual practice (baptism, eucharist, and liturgy) as well as learned ethical behaviors related to moral issues, such as sexual ethics, marriage and celibacy, wealth and poverty, pagan entertainment, military service, and more. Moral Formation and the Virtuous Life is part of Ad Fontes: Early Christian Sources, a series designed to present ancient Christian texts essential to an understanding of Christian theology, ecclesiology, and practice. The books in the series will make the wealth of early Christian thought available to new generations of students of theology and provide a valuable resource for the Church. Developed in light of recent Patristic scholarship, the volumes will provide a representative sampling of theological contributions from both East and West.

The series aims to provide volumes that are relevant for a variety of courses: from introduction to theology to classes on doctrine and the development of Christian thought. The goal of each volume is not to be exhaustive, but rather representative enough to denote for a non-specialist audience the multivalent character of early Christian thought, allowing readers to see how and why early Christian doctrine and practice developed the way it did.