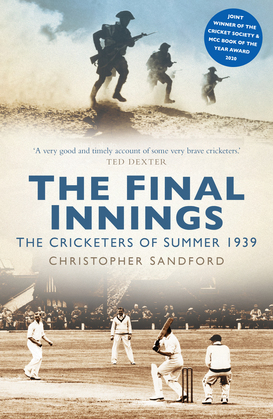 The declaration of war on 3 September 1939 brought to an end a golden age of British cricket, the likes of which has never been repeated. At least 216 of 283 registered British first-class players joined up before the end of the year; fifty-two lost their lives. Here cricket stands as both a statistical and very human representation of the price paid in British blood as a whole.
Final Innings will follow characters of unmatched modesty, charm and often endearing eccentricity in their private and public lives, right up to the moment of their deaths. Men such as Yorkshire and England bowler Hedley Verity and the luxuriously mustachioed Maurice Turnbull will be given voices via their diaries and letters, expertly narrated by acclaimed author Christopher Sandford, who will weave a very human tale of the abrupt transition from the world of Lord’s and the Oval to that of air raids, Dunkirk, the Blitz and the horror that followed.