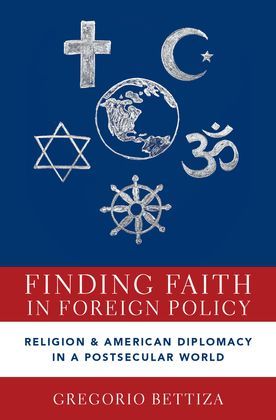 Since the end of the Cold War, religion has become an ever more explicit and systematic focus of US foreign policy across multiple domains. US foreign policymakers, for instance, have been increasingly tasked with monitoring religious freedom and promoting it globally, delivering humanitarian and development aid abroad by drawing on faith-based organizations, fighting global terrorism by seeking to reform Muslim societies and Islamic theologies, and advancing American interests and values more broadly worldwide by engaging with religious actors and dynamics. Simply put, religion has become a major subject and object of American foreign policy in ways that were unimaginable just a few decades ago.

In Finding Faith in Foreign Policy, Gregorio Bettiza explains the causes and consequences of this shift by developing an original theoretical framework and drawing upon extensive empirical research and interviews. He argues that American foreign policy and religious forces have become ever more inextricably entangled in an age witnessing a global resurgence of religion and the emergence of a postsecular world society. He further shows how the boundaries between faith and state have been redefined through processes of desecularization in the context of American foreign policy, leading the most powerful state in the international system to intervene and reshape in increasingly sustained ways sacred and secular landscapes around the globe.

Drawing from a rich evidentiary base spanning twenty-five years, Finding Faith in Foreign Policy details how a wave of religious enthusiasm has transformed not just American foreign policy, but the entire international system.