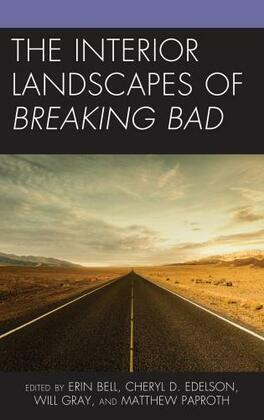 The Interior Landscapes of Breaking Bad

Already acknowledged by Metacritic and the Guinness World Records as the highest-rated series in the history of television, Breaking Bad has elicited an unprecedented amount of criticism. Writers both popular and academic, columnists as well as eager commenters, have addressed every imaginable topic, from the show’s characterization and major scenes, to fine details such as Walt’s knack for picking up habits from those he kills, and the symbolism inherent within the cars that characters own.

This book considers another perspective, one relatively unexplored to date. By considering the series from the perspective of its interior spaces, two possibilities emerge. Firstly, the spaces become a tangible record of their characters’ inner lives, one that provides something like an objective correlative or photographic negative of their thought processes and approach to the world. They provide more, and richer ways to trace the course of character, action, and themes throughout the series. Secondly, Breaking Bad’s spaces are not simply acted upon or within: they interact with characters as well. Interpreted through the theories of Judith Butler, Michel de Certeau, and many others, the series’ homes, labs, RVs and elevators take on new significance.

The collection plumbs the interior spaces of Breaking Bad from many angles. Ultimately, these diverse perspectives enrich an appreciation for the series and its innovative handling of interiors (both literal and metaphorical). They also suggest new ways of reading the series, ensuring it can continue to be explored by academics, students, and fans well into the future.