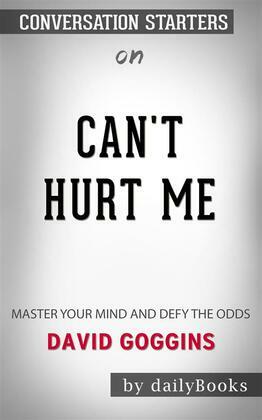 Can't Hurt Me: Master Your Mind and Defy the Odds by David Goggins | Conversation Starters

Can't Hurt Me: Master Your Mind and Defy the Odds by David Goggins | Conversation Starters

David Goggin's childhood was a nightmare and was thus destined for failure. Battling against the odds, he transformed himself into the person he wanted to be through self-discipline, hard work, and mental toughness. He went on to become one of the world's most outstanding endurance athletes, a Navy SEAL, and a U.S. Armed Forces icon.  He is "The Fittest (Real) Man in America" according to Outside magazine. Most people achieve just 40 percent of their potential. To tap into the remaining 60 percent, mental discipline, fortitude, and sacrifice have to be used, he says.

Can't Hurt Me offers powerful lessons for people who want to set and achieve their goals,  according to Men's Health Magazine.