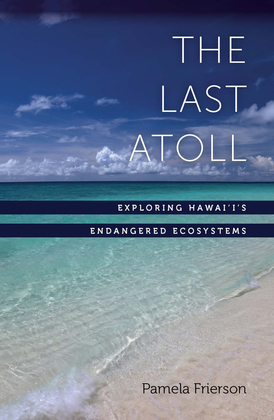 de Pamela Frierson (Auteur)
Non-fiction Actualités et reportages Écologie
The Last Atoll is a first-person account of journalist Pamela Frierson’s ten-year exploration of the exotic and ecologically significant small lands at the far northwestern end of the Hawaiian island chain. Frierson takes readers on a rare journey to eight of these remote and ancient islands, including the Kure Atoll, the oldest Hawa'i'ian island and the northernmost atoll in the world. In her 1,200-mile travels, Frierson discovers isolated landscapes, undisturbed ecosystems, and a nearly forgotten but well-preserved human history. It is a rich history of discovery by explorers and pirates, plus extensive military use. Frierson finds a vast wilderness, including the remnants of ancient volcanoes, and unique species of wildlife. She also explores the islands' location in the Great Pacific Garbage Patch, a major current that washes up the world's garbage. A lifelong resident of Hawai'i, Frierson draws broad conclusions relating to islands and their "canary in a coal mine" role.