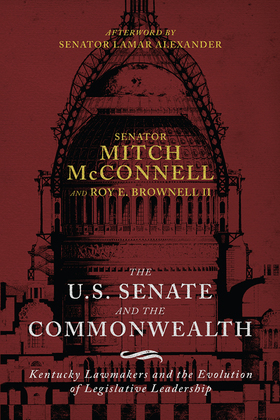 The US Senate and the Commonwealth

Kentucky has long punched above its weight in the US Senate, as some of the nation's most distinguished senators have hailed from the Commonwealth. Despite its relatively small population for much of American history, Kentucky has produced a record two Senate majority leaders, a record three Senate majority whips, and one of the country's greatest lawmakers, Henry Clay. These Kentuckians played an important role in the evolution of leadership institutions in the Senate. Official positions such as Senate majority leader and majority whip are nowhere to be found in the Constitution or early American history, yet today these offices have essentially eclipsed the constitutionally created legislative leadership positions of vice president and president pro tempore. While Kentucky senators have played a vital role in leading the Senate and in its institutional history, no book has told the story in its entirety. The US Senate and the Commonwealth is the first book of its kind to provide a detailed, yet accessible, discussion of the US Senate's leadership throughout its 225-year history. Senator Mitch McConnell and Roy E. Brownell II weave together the history of the Senate with lively portraits of prominent Kentucky senators as well as firsthand reflections about legislative leadership by a Senate majority leader. The authors illuminate and humanize this discussion by exploring the colorful and vivid lives of fifteen Kentucky lawmakers, including Henry Clay, Alben Barkley, and John Sherman Cooper. This compelling and fascinating study is an essential resource.