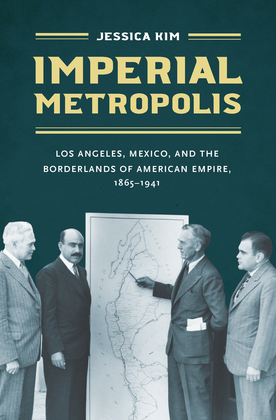 In this compelling narrative of capitalist development and revolutionary response, Jessica M. Kim reexamines the rise of Los Angeles from a small town to a global city against the backdrop of the U.S.-Mexico borderlands, Gilded Age economics, and American empire. It is a far-reaching transnational history, chronicling how Los Angeles boosters transformed the borderlands through urban and imperial capitalism at the end of the nineteenth century and how the Mexican Revolution redefined those same capitalist networks into the twentieth.

Kim draws on archives in the United States and Mexico to argue that financial networks emerging from Los Angeles drove economic transformations in the borderlands, reshaped social relations across wide swaths of territory, and deployed racial hierarchies to advance investment projects across the border. However, the Mexican Revolution, with its implicit critique of imperialism, disrupted the networks of investment and exploitation that had structured the borderlands for sixty years, and reconfigured transnational systems of infrastructure and trade. Kim provides the first history to connect Los Angeles's urban expansionism with more continental and global currents, and what results is a rich account of real and imagined geographies of city, race, and empire.