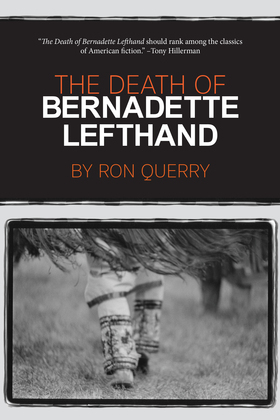 The Death of Bernadette Lefthand

"The Death of Bernadette Lefthand should rank among the classics of American fiction." —Tony Hillerman

"In 100 years, someone will open The Death of Bernadette Lefthand and still be consumed by the wisdom, the different cultural beliefs between tribes, and struck that love and jealousy are the poles from which evil comes. In my top five favorite reads." —Jo-Ann Mapson, author of Blue Rodeo, The Wilder Sister, and Solomon's Oak

"Querry conjures up a fascinating mix of cultures and values, and, best of all, a gripping story." —Hungry Mind Review

Ron Querry's debut novel, originally published in 1993 by Red Crane, is a foundational novel in contemporary Native American writing. Querry uses the alternating viewpoints of Gracie, Bernadette's younger sister, and Starr Stubbs, the wealthy New Yorker who lives just outside of Dulce, New Mexico-to detail the tragic end of Bernadette's life. The conflicting accounts create a compelling novel about heritage, family, and the dark magic of the twisted soul.

This twenty-fifth anniversary edition of Ron Querry's debut novel features a new afterword in which the author offers insight into the writing of this American classic.

Ron Querry is an internationally acclaimed, American author and enrolled member of the Choctaw Nation of Oklahoma. Querry lives in northern New Mexico with his wife, fine art photographer Elaine Querry, and their cow dogs, BeauDog and Shorty.