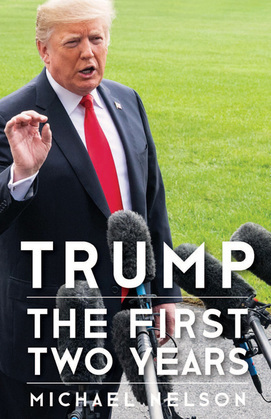 On the first anniversary of Donald Trump’s presidency, Michael Nelson, one of our finest and most objective presidential scholars, published Trump’s First Year, a nonpartisan assessment that was widely hailed as the best account of one of the most unusual years in presidential history. At the midpoint of Trump’s term, Nelson has updated his book to include the second year, which if anything has proven to be even more remarkable.

Beginning with an examination of the dramatic 2016 election, Nelson’s book follows Trump as he takes office under mostly favorable conditions, with relative stability at home and abroad and his party in control of both houses of Congress. Trump leveraged this successfully in some ways, from the confirmation of his nominee Neil Gorsuch to the Supreme Court to the passage of his tax-reform bill. But many more actions were perceived as failures or even threats to a safe, functional democracy, including immigration policies defied by state and local governments, volatile dealings with North Korea, unsuccessful attempts to pass major legislation, and the inability to fill government positions or maintain consistent White House staff.

As Nelson demonstrates in a substantial addition to the original book, Trump’s effectiveness, or lack thereof, did not change significantly in his second year in office, but his approach often did. With the Mueller investigation and the midterm elections looming, Trump threw off his advisors’ restraints and acted more directly on his impulses, reverting to the instincts and rhetoric that had won him the election. While opposition to Trump remained strong in many quarters, resistance among GOP leaders crumbled as they were confronted with their constituents’ support of the president.

Published on the second anniversary of Trump’s inauguration, Nelson’s book offers the most complete and up-to-date assessment of this still-unfolding story.