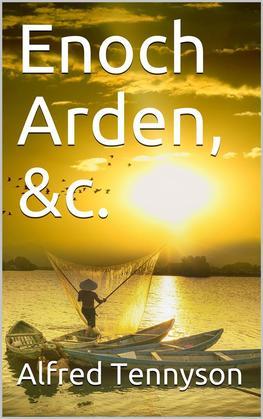 Enoch Arden is a narrative poem published in 1864 by Alfred, Lord Tennyson, during his tenure as England's poet laureate. The story on which it was based was provided to Tennyson by Thomas Woolner. The poem lent its name to a principle in law that after being missing a certain number of years (typically seven), a person could be declared dead for purposes of remarriage and inheritance.

The hero of the poem, fisherman turned merchant sailor Enoch Arden, leaves his wife Annie and three children to go to sea with his old captain, who offers him work after he had lost his job due to an accident; in a manner that reflects the hero's masculine view of personal toil and hardship to support his family, Enoch Arden left his family to better serve them as a husband and father. However during his voyage, Enoch Arden is shipwrecked on a desert island with two companions; both eventually die, leaving Arden alone there. This part of the story is reminiscent of Robinson Crusoe. Enoch Arden remains lost and missing for more than ten years.

He finds upon his return from the sea that, after his long absence, his wife, who believed him dead, is married happily to another man, his childhood friend Philip (Annie has known both men since her childhood, thus the rivalry), and has a child by him. Enoch's life remains unfulfilled, with one of his children now dead, and his wife and remaining children now being cared for by his onetime rival.

Enoch never reveals to his wife and children that he is really alive, as he loves her too much to spoil her new happiness. Enoch dies of a broken heart.

The story could be considered a variation on and antithesis to the classical myth of Odysseus, who after an absence of 20 years at the Trojan War and at sea found a faithful wife who had been loyally waiting for him. The use of the name Enoch for a man who disappears from the lives of his loved ones is surely inspired by the biblical character Enoch. In fact also the entire chronological structure of the protagonist's life with its cycles related to the biblical symbolism of the "days of Creation" binds to the name of Enoch, as demonstrated by the analysis of an Italian thinker long interested in this work, and denotes the impressive ability of Tennyson to insert theological intentions into simple elegiac mode with an unprecedented complexity in English literature.

Enoch Arden -- Aylmer's field -- Sea dreams -- The grandmother -- Northern farmer -- Tithonus -- The voyage -- In the valley of Cauteretz -- The flower -- Requiescat -- The sailor-boy -- The islet -- The ringlet -- A welcome to Alexandra -- Ode sung at the opening of the international exhibition -- A dedication -- Boadicea -- In quantity -- Specimen of a translation of the Iliad in blank verse.