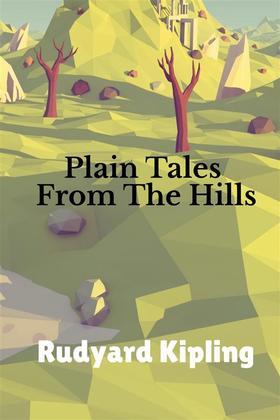 Plain Tales from the Hills

Plain Tales from the Hills (published 1888) is the first collection of short stories by Rudyard Kipling. Out of its 40 stories, "eight-and-twenty", according to Kipling's Preface, were initially published in the Civil and Military Gazette in Lahore, Punjab, British India, between November 1886 and June 1887. "The remaining tales are, more or less, new." (Kipling had worked as a journalist for the CMG—his first job—since 1882, when he was not quite 17.)

The title refers, by way of a pun on "Plain" as the reverse of "Hills", to the deceptively simple narrative style; and to the fact that many of the stories are set in the Hill Station of Simla—the "summer capital of the British Raj" during the hot weather. Not all of the stories are, in fact, about life in "the Hills": Kipling gives sketches of many aspects of life in British India.

The tales include the first appearances, in book form, of Mrs. Hauksbee, the policeman Strickland, and the Soldiers Three (Privates Mulvaney, Ortheris and Learoyd). Wikipedia.