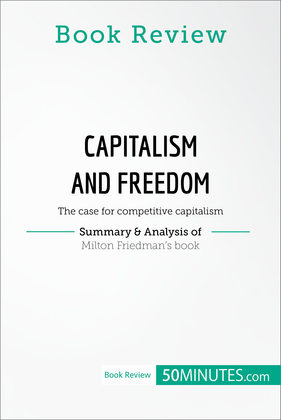 It can be hard for busy professionals to find the time to read the latest books. Stay up to date in a fraction of the time with this concise guide.

Capitalism and Freedom outlines the Nobel Prize-winning economist Milton Friedman's views on the relationship between economics and politics. Specifically, he believes that economic freedom is necessary both in and of itself, and because it is inextricably linked to political freedom. He applies this insight to a host of contemporary problems to argue that the situation could be improved by what he refers to as "competitive capitalism". Capitalism and Freedom has sold hundreds of thousands of copies since it was first published in 1962, and was described by The Times Literary Supplement as "one of the most influential books published since the war". Friedman himself was one of the most influential economists of the 20th century, and his ideas have been adopted by governments around the world.

This book review and analysis is perfect for:
oStudents of economics and politics
oAnyone with an interest in the history of economic thought
oAnyone looking to understand the role of the government in the economy

About 50MINUTES.COM | BOOK REVIEW
The Book Review series from the 50Minutes collection is aimed at anyone who is looking to learn from experts in their field without spending hours reading endless pages of information. Our reviews present a concise summary of the main points of each book, as well as providing context, different perspectives and concrete examples to illustrate the key concepts.