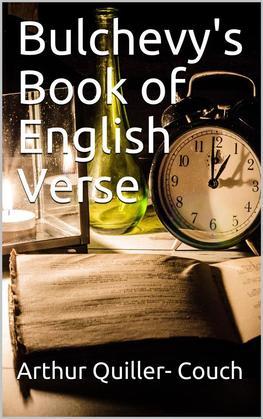 Bulchevy's Book of English VerseOxford english online written by Arthur Quiller Couch.For this Anthology I have tried to range over the whole field of English Verse from the beginning, or from the Thirteenth Century to this closing year of the Nineteenth, and to choose the best. Nor have I sought in these Islands only, but wheresoever the Muse has followed the tongue which among living tongues she most delights to honour. To bring home and render so great a spoil compendiously has been my capital difficulty. It is for the reader to judge if I have so managed it as to serve those who already love poetry and to implant that love in some young minds not yet initiated. My scheme is simple. I have arranged the poets as nearly as possible in order of birth, with such groupings of anonymous pieces as seemed convenient.

For convenience, too, as well as to avoid a dispute-royal, I have gathered the most of the Ballads into the middle of the Seventeenth Century; where they fill a languid interval between two winds of inspiration?the Italian dying down with Milton and the French following at the heels of the restored Royalists. For convenience, again, I have set myself certain rules of spelling. In the very earliest poems inflection and spelling are structural, and to modernize is to destroy. But as old inflections fade into modern the old spelling becomes less and less vital, and has been brought (not, I hope, too abruptly) into line with that sanctioned by use and familiar.

To do this seemed wiser than to discourage many readers for the sake of diverting others by a scent of antiquity which?to be essential? should breathe of something rarer than an odd arrangement of type. But there are scholars whom I cannot expect to agree with me; and to conciliate them I have excepted Spenser and Milton from the rule.