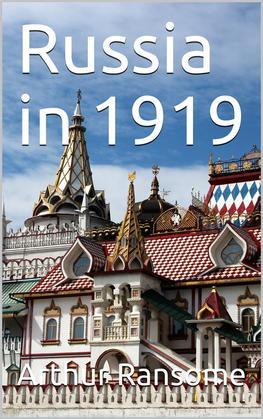 Arthur Ransome reported his visit to Russia in his role as a reporter and describes the situation in Revolutionary Russia with candour in his wonderfully clear writing style. He meets and has conversations with a spectrum of the Russians in this historic era, including 2 meetings with Lenin.

Ransome was not a Bolshevik and wrote an honest and unbiased account of his experience.

He returns to Russia a year and a half after the Bolsheviks take power and finds a nation trying to adjust to a new government, and a new economic way. He does a good job highlighting the positives and the negatives of a country besieged from the outside by capitalist Europe and the United States, and suffering internally from extreme shortages of food and fuel. Ransome talks with government officials and everyday workers. He gives a really good balanced report of what life was like in these early days of the revolution.

Many government people and many workers openly voice misgivings about the Bolsheviks on the one hand, but are clearly happy to have gotten rid of the Tsar and are willing to work with the Communists in the hope of building a better Russia. There is also a lot of good reporting on the internal political movements in Russia who were organizing against the Bolsheviks. Ransome interviewed Lenin a couple of times while there and they had friendly discussions. Ransome describes Lenin listening to his opponents (including Ransome) about why revolution ultimately would not spread to England and Germany as Lenin hoped, and Ransome clearly respected Lenin for his leadership abilities and willingness to look at alternative scenarios should his own plans fail to materialize.

Ransome left Russia (which he described as his 'second home') to file his reports, and he went on to become one of England's leading writers of Childrens Books over the next few decades. Anyone interested in the Russian Revolution will find this an entertaining and thoughtful book about one of the more spectacular political upheavals of the 20th century.