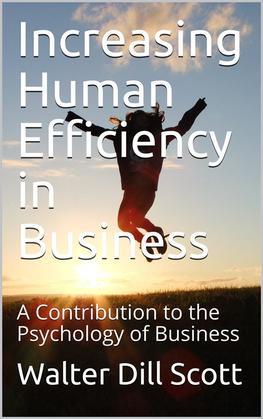 We've built machines to become more efficient in business, but humans remain human -- and inefficient. But must that always be the case? According to renowned business psychologist Walter Dill Scott, managers can help workers find their "second wind," the point at which they move past their previous limits and achieve top performance.

Applying psychology to business, Scott wrote, "when a man is doing what he believes to be his best, he is still able to do better; when he is completely exhausted, he is, under proper stimulus, able to continue."

In Increasing Human Efficiency in Business, Scott explores how to create motivation for success. He looks at factors such as imitation, competition, loyalty, concentration, wages, pleasure, "the love of the game," relaxation, and habit formation. He hopes to find each worker's latent powers and hidden stores of energy to discover "wider horizons of honorable and profitable activity."

WALTER DILL SCOTT applied psychology to the fields of advertising, vocational aptitude, and business. He created a rating scale that would predict a job applicant's success in a given position; this scale was modified for the military during World War I with great success. For this contribution, Scott earned a Distinguished Service Medal at the end of the war. He retired as President Emeritus from Northwestern University, which he led from 1920 -1939.