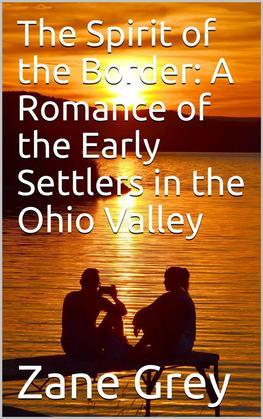 The Spirit of the Border: A Romance of the Early Settlers in the Ohio Valley

Spirit of the Border is an historical novel written by Zane Grey, first published in 1906. The novel is based on events occurring in the Ohio River Valley in the late eighteenth century. It features the exploits of Lewis Wetzel, a historical personage who had dedicated his life to the destruction of Native Americans and to the protection of nascent white settlements in that region. The story deals with the attempt by Moravian Church missionaries to Christianize Indians and how two brothers' lives take different paths upon their arrival on the border. A highly romanticized account, the novel is the second in a trilogy, the first of which is Betty Zane, Grey's first published work, and The Last Trail, which focuses on the life of Jonathan Zane, Grey's ancestor.

This is a fascinating story of frontier men and women who face challenging times as they try to establish their lives in missionary border settlements where they are trying to convert Indians to their religious beliefs and improve their lives through raising cattle and farming. Many brutal and sacrificing events take place in this wilderness territory. There are a number of hiding places revealed in the wilderness that are used as a sanctuary for young couples trying to survive being pursued by blood lusting Indians. Many noble acts of valor are depicted in the face of extreme brutality by warring Indian tribes. Vengeance and mercy are also found in this story.