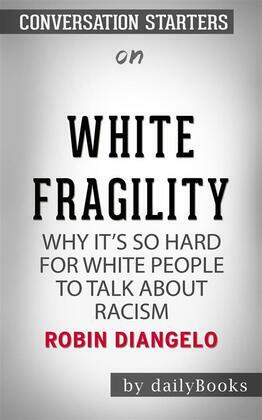 White Fragility: Why It's So Hard for White People to Talk About Racism by Robin DiAngelo | Conversation Starters

White Fragility: Why It's So Hard for White People to Talk About Racism by Robin DiAngelo | Conversation Starters

The New York Times best-selling book White Fragility: Why It's So Hard for White People to Talk About Racism explores the reactions that white people have when their personal assumptions about race are challenged. DiAngelo observes that when their reactions are challenged, they maintain racial inequality.

DiAngelo is an anti-racist educator and she deftly illuminates in this book the phenomenon of white fragility. This book allows the readers to understand that racism is a practice that is not restricted to ‘bad people.’ She discusses the defensive moves that white people make when they are racially challenged. White fragility appears in a range of emotions like fear, anger, and guilt. It also appears to include silence and argumentation. These behaviors reinstate white racial equilibrium and prevent further meaningful cross-racial dialogue. DiAngelo explores white fragility, how it develops, how it gets triggered, how it protects racial inequality and how we can engage people better.

The New Yorker says that White Fragility is an “irrefutable exposure of racism in thought and action and its call for humility and vigilance.”