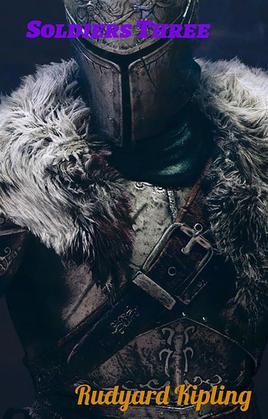 Soldiers Three is a collection of short stories by Rudyard Kipling. The three soldiers of the title are Learoyd, Mulvaney and Ortheris, who had also appeared previously in the collection Plain Tales from the Hills. The current version, dating from 1899 and more fully titled Soldiers Three and other stories, consists of three sections which each had previously received separate publication in 1888; Learoyd, Mulvaney and Ortheris appear only in the first section, which is also titled Soldiers Three. The books reveal a side of the British Tommy in Afghanistan rarely seen in the Twilight of the British Empire. The soldiers comment on their betters, act the fool, but cut straight to the rawness of war in the mid-east as the British began to loosen their Imperial hold.  Wikipedia.