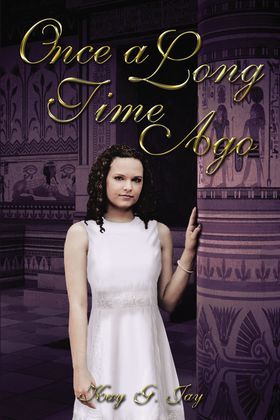 Once, A Long Time Ago

Daniel MacKenzie aka Danny Mac, a handsome former Marine and CIA operative, turned to Jesus for healing from his painful past. As he settles into his life as a minister, Kenann James blows into his apartment and his life. Kenann is a petite, curly haired dynamo who moved into the apartment across the hall and hearing his cries from his frequent bad dreams, runs to his aid and tripping on the foyer rug blasts into his room like a cannonball. And if the normal course of events doesn’t awaken their love, getting kidnapped together by Danny Mac’s former lover seals it. Katerina Troika, a strikingly beautiful woman, has infiltrated an ancient secret society and needs Danny Mac’s former skills as an assassin to eliminate the competition. She kidnaps Kenann to ensure his cooperation. When they arrive in Alexandria, Egypt, things soon go awry. The leader of the society takes one look at Kenann and believes her to be the reincarnated goddess Inanna, the Sumerian deity that was the forerunner of Ishtar and Isis. His desire to possess her sets them on a collision course for disaster. Back home in Memphis, the amateur rescue contingency is already on the move. Mrs. Gage has taken charge. She is a wealthy widow with more money than Croesus and a penchant for intrigue who soon marshals the resources of Judy, Kenann’s gorgeous friend, and Jake, the former Marine commander turned church elder. It was through Jake that Danny Mac met the carpenter from Galilee. Danny Mac’s contacts in the CIA sprang into action as soon as the kidnapping occurred. The leader was Danny Mac’s old friend, Andrew O’Hanlon, who quickly fell for Kenann’s friend, Judy. Blade - the young bi-racial boy Danny Mac had befriended in the neighborhood, overheard the rescue plans and stowed away on the private plane Mrs. Gage had employed to take them to Egypt. He was only allowed to stay because she knew a dark- skinned boy could come in handy in their efforts to blend in and gain intel. The final member of their Merry Band of Misfits is Kenann’s beloved Granny, Moira James. When she showed up unannounced on Kenann’s doorstep, Mrs. Gage’s only response was of course you will go to her rescue. And so, the band was formed. Bonds would be forged stronger than family and become a force that would do battle from the ancient secret society to the halls of the Pentagon. The story culminates in a magnificent underground complex in the desert of Egypt. It is an ancient but well-hidden community complete with a massive pyramid to rival Giza and will seal the fate of Kenann, reincarnated goddess, Inanna. This story has it all. It blends some often-intense romance with grand adventure. It shows how faith and trust in God can change lives. It shows evil at its core and the ways good can overcome through the power of Jesus Christ. It has hints of secret and mysterious elements that will intrigue the reader. But in the end, it is about relationships, friendships and the power of love.