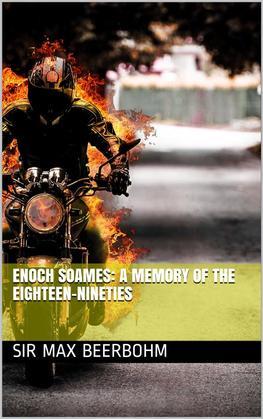 Enoch Soames: A Memory of the Eighteen-Nineties

"Enoch Soames" is the title of a short story by the British writer Max Beerbohm. Enoch Soames is also the name of the main character.

The piece was originally published in the May 1916 edition of The Century Magazine, and was later included in Beerbohm's anthology, Seven Men (1919). It is a comic tragedy, involving elements of both fantasy and science fiction; well known for its clever and humorous use of the concepts of time travel and pacts with the Devil.

The author uses a complex combination of fact and fiction to create a sense of realism. Although Mr. Soames is a fictional character, Beerbohm includes himself in the story, which he also narrates; and writes it as the reminiscences of a series of actual events which he witnessed and participated in as a younger man. The work also contains a written portrait of the real-life artist William Rothenstein, as well as countless references to contemporary-to-1897 events and places. In addition, Rothenstein actually drew the "portrait" of Soames which is mentioned in the text; although the work was probably created closer to the date of publication, than to the 1895-date given in the story. Beerbohm himself also drew a cartoon-sketch of Soames, and the two pictures are recognisably of the same "person".

Writing as a narrator describing events from his own past, Beerbohm presents himself as a moderately successful young English essayist during the 1890s. He then relates the tragic history of an older colleague named Enoch Soames. The son of a bookseller from Preston, living off an inherited annuity, he is an utterly obscure, forgettable aspiring poet in the Decadent manner. Over the course of the story, he authors three unsuccessful books, of which Beerbohm provides parodies of his book of poems, "Fungoids". Soames’ appearance is described as “dim” and leaves little impression, except for his persistent habit of always wearing a particular grey waterproof cape and soft black hat.

On the afternoon of 3 June 1897, Soames and Beerbohm are having lunch in the Soho-based "Restaurant du Vingtieme Siecle". The self-obsessed Soames is deeply depressed, consumed with the belief that he is an unrecognised great author and, despite his complete failure so far, keenly curious about his "certain" posthumous fame. He therefore agrees to a contract offered by the Devil, who introduces himself from a neighbouring table. In exchange for the possession of his soul, Soames will be transported exactly 100 years forward in time to spend the rest of the afternoon in the British Museum Reading Room and discover what judgement posterity will make on himself and his works. After the allotted time has expired, Soames will be returned to their present date and location, but at the same time of evening as his departure from the future, and the Devil will then collect his payment.