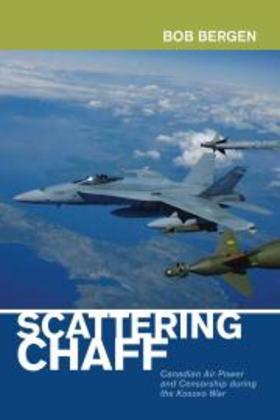 Most Canadians know little, if anything at all, about the role of the Canadian Air Force in the 1999 Kosovo Air War. Yet lives were at put at stake as mission dedication and military skill were pushed to the limit.

Some of Canada's most prominent journalists attempted to report on the war, but came away virtually empty handed. Daily briefings given at the National Defence Headquarters provided so little information most Ottawa journalists simply stopped going. The decision of the military to choke Canada's news media was deliberate and based on a tactical and strategic rationale.

Scattering Chaff explores the role of the Canadian Air Force in the bombing campaigns of the Kosovo Air War while examining the military's interference with the news media attempting to report to the Canadian public. It explores the ways in which the military has come to manage the media as an element of operational security, mission focus, and of popular opinion. Drawing on in-depth interviews with the war's Canadian participants and a treasure-trove of unpublished documents and photographs, this book is an unprecedented investigation of a little-known conflict and the forces that prevented it from being better known.