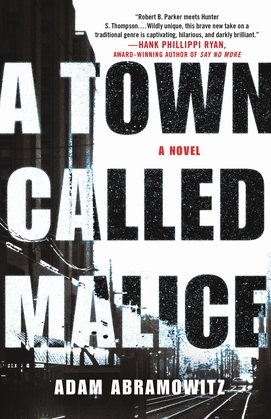 A bike messenger navigates Boston?s gritty underworld of gangsters and blood money in this novel with more twists and turns than Boston?s streets, in Adam Abramowitz's A Town Called Malice.

Boston?s Big Dig has put a brand new shine on the city, its once insular neighborhoods awash with new money and runaway development. Not everybody is happy with the change. Zesty is struggling to keep his courier business afloat and is falling behind on rent, while his brother, Zero, owner of a moving company stocked with ex-cons has hired an unemployed rabbi who begins to exert a strange influence on the family and delivers most of his sermons with his fists.

When a rock and roll legend suspected of murdering his girlfriend reappears after thirty years on the run, Zesty is once again haunted by his family?s dark past and the mounting evidence that his father, Boston?s former Poker King now suffering from Alzheimer?s, has long been dealing from the bottom of the deck. From shady bars to college campus underground poker leagues, Zesty?s speeding toward trouble, desperately trying to map out a future in a town where stop signs are optional, signaling is for the weak and Karma lurks around every corner with payback on its mind.