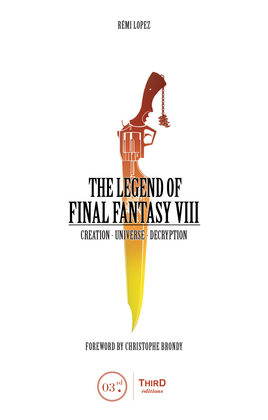 The Legend of Final Fantasy VIII

The eighth episode of the incredible story of Final Fantasy.

A legendary episode of the Japanese RPG, Final Fantasy VIII is fully decoded in this book.

Discover a complete analysis of one of the most famous saga of the world of video games, embellished with a reflection on the report of the fans to the series. To read as soon as possible!

The work on Final Fantasy VIII began in 1997, just after Final Fantasy VII was completed, and the game?s development ran concurrently with that of Parasite Eve. Although Final Fantasy VII marked a genuine turning point in the series, the designers were hardly lackadaisical when it came to the eighth episode?s production and staging. In fact, they worked doubly hard to avoid disappointing fans after their adventure with Cloud. First, the decision was made to use the same console: the Sony PlayStation. Since the seventh episode was a smashing success, the major personalities who had presided over its creation were reassembled to create the new game. Thus, the team consisted of the renowned Hironobu Sakaguchi, Yoshinori Kitase (as director), Kazushige Nojima (as scriptwriter), Yûsuke Naora (as artistic director), and Tetsuya Nomura (as character designer). And, of course, the distinguished composer Nobuo Uematsu was once again chosen to create the episode?s magnificent soundtrack in its entirety.