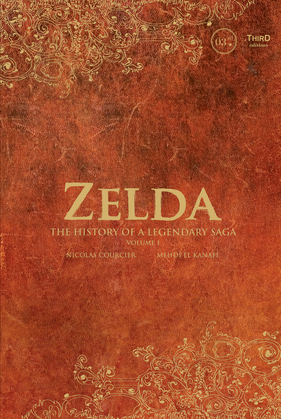 A collector's book to learn more about the world of one of the most legendary video games!

To celebrate the 30th anniversary of The Legend of Zelda, Third Editions wanted to pay respect to this legendary saga, one of the most prestigious in the gaming world. This work chronicles every game of the series, from the first episode to the latest Hyrule Warriors on 3DS, deciphering the whole universe using deep analysis and reflection. Dive into this unique publication, presented as an ancient tome, which will allow adventure fans to finally (re)discover the amazing Legend of Zelda.

Immerse yourself in this unique collection, presented in the form of an old grimoire, which will delight all adventure lovers to finally discover the fabulous legend of Zelda!

In the kingdom of Hyrule, a legend has been passed down since the beginning of time: A mysterious artifact known as the Triforce, symbolized by three golden triangles arranged to form a fourth triangle, is said to possess mystical powers.
It is hardly surprising that this object has been coveted by many power-hungry men over the centuries. One day, the evil Ganon, the Prince of Darkness whose ambition is to subjugate the entire world to his will, sends his armies to attack the peaceful kingdom. He manages to capture one of the fragments of the Triforce, the triangle of power.
Daughter of the king of Hyrule, Princess Zelda is terrified at the prospect of seeing Ganon?s armies swarming over the world. She, too, seizes a fragment of the Triforce, the triangle of wisdom, and chooses to break it into eight pieces, which she then scatters across the world, hiding them to prevent Ganon from ever acquiring them. She then orders her faithful nursemaid Impa to go forth and seek a warrior brave enough to challenge Ganon.
As Impa roams the kingdom of Hyrule in the hope of finding a savior, Ganon learns of Zelda?s plans and has her locked up before sending his men to track down the nursemaid. Surrounded by these ruthless creatures, Impa is saved by a young boy named Link at the very moment when it appears that all is lost. As unbelievable as it may seem, Link has been chosen by the golden triangle of courage, and thus holds a part of the Triforce himself. Convinced that she has finally found the one who will save the kingdom, Impa hurries to tell him her story. Link accepts his mission to rescue Zelda without hesitation. Before confronting Ganon, however, he will have to gather the eight fragments of the triangle of wisdom, which are his only hope of gaining entry to the dungeon deep beneath Death Mountain where the Prince of Darkness hides. His quest has only just begun.

Nicolas Courcier and Mehdi El Kanafi - Fascinated by print media since childhood, Nicolas Courcier and Mehdi El Kanafi wasted no time in launching their first magazine, Console Syndrome, in 2004. After five issues with distribution limited to the Toulouse region of France, they decided to found a publishing house under the same name. One year later, their small business was acquired by another leading publisher of works about video games. In their four years in the world of publishing, Nicolas and Mehdi published more than twenty works on major video game series, and wrote several of those works themselves: Metal Gear Solid. Hideo Kojima?s Magnum Opus, Resident Evil Of Zombies and Men, and The Legend of Final Fantasy VII and IX. Since 2015, they have continued their editorial focus on analyzing major video game series at a new publishing house that they founded together: Third.