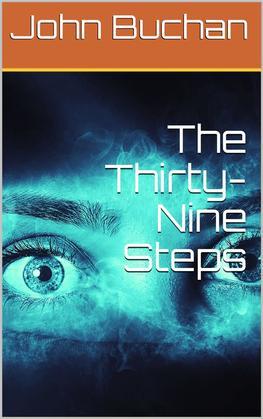 The Thirty-Nine Steps is an adventure novel by the Scottish author John Buchan. It first appeared as a serial in Blackwood's Magazine in August and September 1915 before being published in book form in October that year by William Blackwood and Sons, Edinburgh. It is the first of five novels featuring Richard Hannay, an all-action hero with a stiff upper lip and a miraculous knack for getting himself out of sticky situations.

The novel formed the basis for a number of film adaptations: Alfred Hitchcock's 1935 version; a 1959 colour remake; a 1978 version which is perhaps most faithful to the novel; and a 2008 version for British television. In 2003 the book was listed on the BBC's The Big Read poll of the UK's "best-loved novels."

The novel is set during May and June 1914; war was evident in Europe, Richard Hannay the protagonist and narrator, an expatriate Scot, returns to his new home, a flat in London, after a long stay in Rhodesia to begin a new life. One night he is buttonholed by a stranger, a well-travelled American, who claims to be in fear for his life. The man appears to know of an anarchist plot to destabilise Europe, beginning with a plan to assassinate the Greek Premier, Constantine Karolides, during his forthcoming visit to London. The man reveals his name to be Franklin P. Scudder, a freelance spy, and remarks that he is dead, which holds Hannay's attention. Scudder explains that he has faked his own death to avert suspicion. Scudder claims to be following a ring of German spies called the Black Stone who are trying to steal British plans for the outbreak of war. Hannay lets Scudder hide in his flat, and sure enough the next day another man is discovered having apparently committed suicide in the same building. A couple of days later Hannay returns home to find Scudder dead with a knife through his heart.

Hannay fears that the murderers will come for him next, but cannot ask the police for help because he is the most likely suspect for the murders as he lived in the same building. He also feels a duty to take up Scudder's cause and save Karolides from the assassination. He decides to go into hiding in Scotland and then to contact the authorities at the last minute. To escape from his flat unseen, he bribes the milkman into lending him his uniform and exits wearing it, escaping from the German spies watching the house. Carrying Scudder's pocket-book, he catches an express train leaving from London's St. Pancras Station. Hannay fixes upon Galloway, in south-west Scotland, as a suitably remote place in which to make his escape and remembers somehow the town of Newton-Stewart, which he names as his destination when he buys his ticket from the guard.

Arriving at a remote station somewhere in Galloway (apparently not Newton Stewart itself), Hannay lodges in a shepherd's cottage. The next morning he reads in a newspaper that the police are looking for him in Scotland. Reasoning that the police would expect him to head for a port on the West Coast, he boards a local train heading east, but jumps off between stations. He is seen but escapes, finding an inn where he stays the night. He tells the innkeeper a modified version of his story, and the man is persuaded to shelter him. While staying at the inn, Hannay cracks the substitution cipher used in Scudder's pocket-sized book. The next day two men arrive at the inn looking for Hannay, but the innkeeper sends them away. When they return later, Hannay steals their car and escapes.