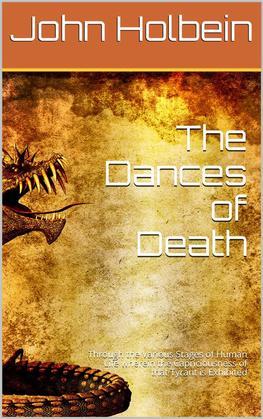 Done From The Original Designs, Which Were Cut In Wood, And Afterwards Painted.

JOHN or HANS HOLBEIN was born at Basil in 1498, and died at London of the plague in 1554, aged 56. This admirable Painter was instructed in the art by his father JOHN HOLBEIN. In the early part of his life, he pursued his studies with incessant assiduity; and being possessed of an elevated genius, his progress was exceedingly rapid; so that he soon became far superior to his instructor. He painted equally well in oil, water colours, and in fresco; and although he had never practised the art of painting in miniature till he resided in England, yet he afterwards carried it to its highest perfection.

In the town of Basil he painted a picture of our Saviour’s Sufferings, as well as a Dance of Peasants.

The designs for Death’s Dance were cut in wood by Holbein, and published with the original texts from which they were taken; from that work the following plates were done. They contain the whole of Death’s Dance, with borders and decorations; to which are added, a description of each plate in French and English, and a portrait of Holbein.