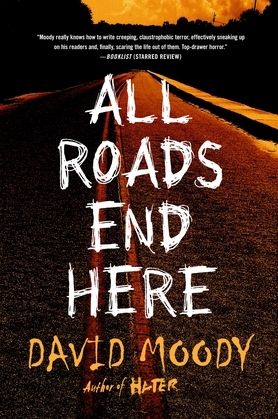 The second book in the new series from Hater author David Moody.

Set in the world of David Moody's Hater trilogy, All Roads End Here is the sequel to the "top drawer horror" (Booklist, starred review) One of Us Will Be Dead by Morning.

It's taken Matthew Dunne almost three months to get home. Never more than a few meters from the Haters at any time, every single step has been fraught with danger. But he's made it.

In his absence, his home city has become a sprawling, walled-off refugee camp. But the camp-and the entire world beyond its borders-is balanced on a knife-edge. During his time in the wilderness, Matt developed a skill which is in high demand: the ability to anticipate and predict Hater behavior. It's these skills that will thrust him into a web of subterfuge and danger. As the pressure mounts inside the camp, he finds himself under scrutiny from all sides.

He's always done his best to avoid trouble, but sometimes it can't be helped. The shit's about to hit the fan, and this time Matt's right at the epicenter.

All Roads End Here is a fast-paced, and wonderfully dark story about humanity's fight for survival in the face of the impending apocalypse.