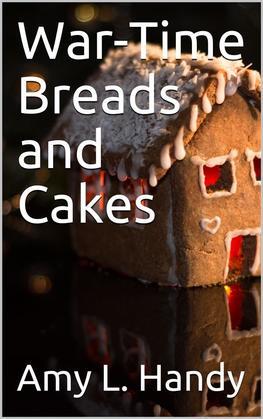 For the last twenty years the housewives of our country have been more and more depending upon the bakers for the bread used in the homes. In some of our cities the home-baked loaf is hardly known.

Although the commercial bread has been of great variety and of excellent quality, it has never been an economical method of serving the family with the staff of life.

By depending upon ready-baked bread we have come to consider it a difficult process to make good yeast bread and almost a hardship to try to have home-made bread.

I had fallen into the habit of buying my bread; my family was so small that it hardly seemed necessary to insist that bread should be made in my kitchen when good bread could be bought at a reasonable price. The result was that when the call came to conserve the wheat, I resorted almost entirely to quick breads made with baking powder or with sour milk and soda. However, the experiments that I made with these materials proved so interesting and satisfactory that I decided to see what I could do with a yeast cake and other grains than wheat.

My first experiments were failures and I was discouraged because, instead of saving food, I was wasting it, and yet I was unwilling to acknowledge myself defeated by the little square of leaven that came to me so attractively done up in tinfoil.

After careful consideration I decided that I had rushed into undue intimacy with a force of which I had very little understanding and that I might do better if I cultivated the acquaintance by degrees.

My next experiments were made with a very simple sponge of whole wheat flour, water, and yeast, which I allowed to rise for about four hours. I divided it into four parts, and to one I added scalded corn meal and rye flour; to the second, raw corn meal and whole wheat flour; to the third, barley flour and rye; and to the fourth, rice flour. I put salt in each lot, but no sugar or shortening. As I worked I kept a paper and pencil beside me and made careful notes of everything I did, also of results that I expected and of any doubts that occurred to me as to the wisdom of what I was doing. The four little loaves that resulted taught me many things and were the beginning of experiments that lasted through the summer—experiments that any housekeeper could make, for I had no laboratory, only the kitchen of my country house and the utensils found in every house.

In giving the results of my summer’s work I have tried to make the recipes so simple and yet explicit that the most inexperienced cook can follow them.