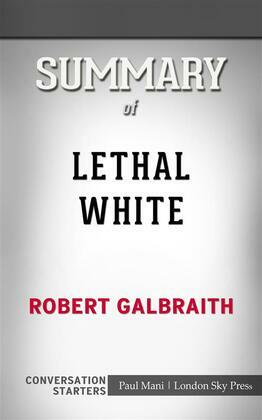 The apparently deranged Billy Knight visits detective Cormoran Strike in his office and tells him he saw a child murdered and buried beneath the ground wrapped in a pink blanket. Soon, the minister of culture, Jasper Chiswell, asks Strike’s services to look into two men who are blackmailing him but does not want to tell Strike what the blackmail is all about. It turns out that the blackmailers are Jimmy Knight, Billy’s brother, and Geraint Winn, minister of sports Della Winn’s husband. The 2012 London Olympics is happening and people are excited and nervous about the major international event. While Strike tries to solve the puzzle, the tension between Strike and his partner Robin Ellacot heightens. Will they end up with each other? Is Billy Knight’s story about the murdered girl in pink blanket real?

Lethal White is the fourth book in Robert Galbraith’s crime series featuring detective Cormoran Strike. Galbraith is a pen name of the famous Harry Potter author J.K. Rowling. The series is now a popular BBC television series featuring the actors Tom Burke as the detective and Holliday Grainger as his partner Robin Ellacot.